This 22km (14 miles) circular cycle route will take you from the heart of Newcastle’s Quayside, along cycle routes down to the iconic Angel of the North statue, then back along the historic Bowes Railway that is now reopened as a dedicated cycle track. There are plenty of delightful places to stop, rest, eat, drink and shop along the way so take your time and make a day of it!

You can also extend the route from the Angel of the North through country lanes down to the Beamish Living Museum. What to expect: some sections of this route follow cycle paths which switch between road and pavement along National Cycle Route 725 from the centre of Newcastle down to the Angel of the North. The old railway line which forms part of National Cycle Route 11 is good quality in most places, though has been worn away by rain in some parts where extra care is required. There is the occasional steep section here where you may prefer to get off and push your bike a short distance! 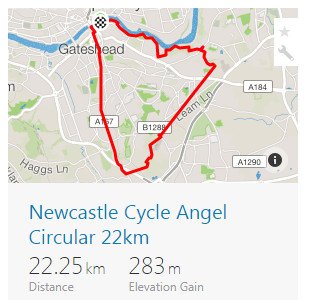 We start this cycle route at the Gateshead Millennium Bridge (green star on map below).

Opened to the public in 2001, it has already won a host of accolades including the Royal Institute of British Architects Stirling Prize. It is the world’s first and only tilting bridge! Designed by Wilkinson Eyre Architects and engineered by Gifford, the bridge takes its place at the end of a line of distinguished bridges across the River Tyne, including the Tyne Bridge and Robert Stephenson’s High Level Bridge. Linking Gateshead with Newcastle via Gateshead Quays (described as one of the best places in Europe by Tony Blair) and Newcastle’s Quayside, the bridge not only serves a functional purpose as the River Tyne’s only foot and cycle bridge, but its grace and engineering attract people from all over the world. Anyone travelling on a pleasure boat up the River Tyne will pass under the bridge and those watching from the banks of the river will join the thousands who enjoy this view every year. 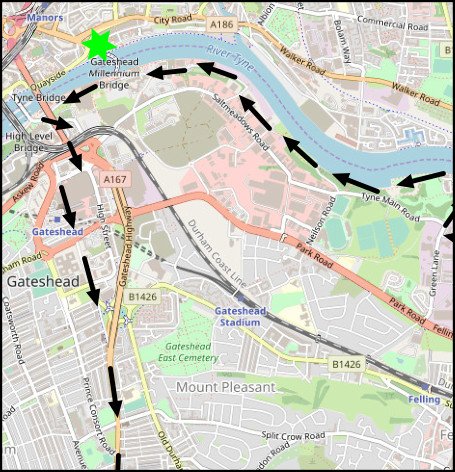 From the Newcastle (North) side of the River, cycle over the Gateshead Millennium Bridge to the Gateshead side with the BALTIC on your left.

Cross over the plaza to the far right to take the ramp to the left of the naval base up onto South Shore Road.

Follow this cycle route (No 14 Keelman’s Way) for a short distance, passing The Sage Gateshead up on your left, into Hillgate and underneath the Tyne Bridge.

Turn left onto Cannon St, cycle back under the Tyne Bridge.

Turn right into Church St and cycle to the main road A167.

Take the continuation of the cycle route onto the pavement and use the pedestrian crossing lights to cross over to the far side of the main road and go left through the cycle/pedestrian tunnel running alongside A167 High St.

Cross over Askew Road A184 and continue ahead along the cycle way pavement running alongside A167. 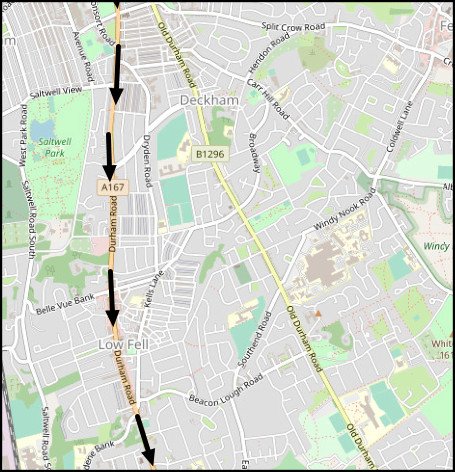 At the end turn left into West St. Continue along West St into High West St, all the while following cycle route 725 signs to cross safely at road junctions. At times the cycle route will cross to opposite sides of the road and then back again further along.

Continue to follow Cycle Route 725 along A167 Durham Road until you reach the Angel of the North sculpture which will be visible on your right, just before you reach the A1. 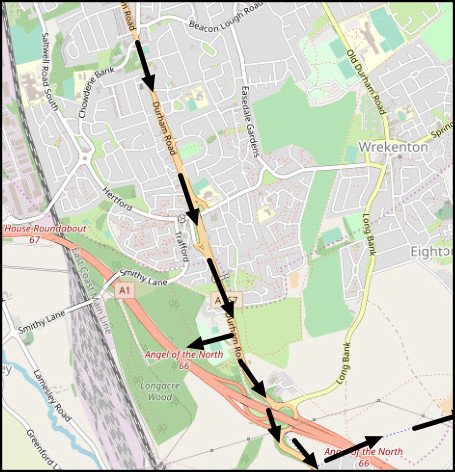 The Angel of the North is as much a part of Gateshead’s identity as the Statue of Liberty is to New York. Since it first spread its wings in February 1998, it has become one of the most talked about and recognisable pieces of public art ever produced.

It was in 1990 that the site, a former colliery pithead baths, was re-claimed and earmarked for a future sculpture. When sculptor Antony Gormley was selected as the winning artist in 1994, his designs originally caused uproar. The controversial material and site of the sculpture were frowned upon. However, once in place many people’s original views on the piece changed completely. Local residents have fallen in love with the Angel and it has become synonymous with Gateshead.

Amazing facts about the Angel of the North. 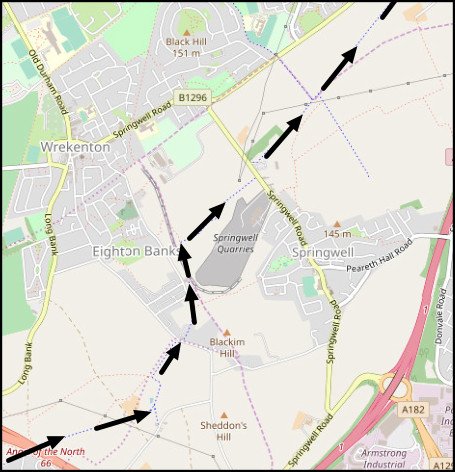 Once you have had a wander around, continue your cycle as follows:

Turn right out of the Angel car park to continue along the pathway running alongside the A167 Durham Road to the roundabout underneath the A1.

Follow the pavement round to the right and under the A1.

Continuing along the pavement in an anti-clockwise direction around the roundabout, cross over 2 slip roads leading off and onto the A1 and then cross to the other side of the next road A167 Newcastle Bank – TAKE CARE AS YOU CROSS THESE ROADS AS THERE ARE NO PEDESTRIAN TRAFFIC LIGHTS.

Follow the small cycle track ahead for just 10m and then first right towards an abandoned road.

At the end of the abandoned road continue ahead along A167 Newcastle Bank for approx 100m. ​Turn left off the road onto the signposted cycle route along the old Bowes Railway Path.​

Continue along the Bowes Railway Path until you reach the Engine Room pub on Rockcliffe Way.

Continue ahead along Bowes Railway Path for approx 350m and you will pass the Wagon Inn on your left.

Cross over the old railway tracks, follow the path to the left, and after approx another 200m you will come to a section in the trees where the main path appears to continue straight ahead but a smaller path heads off to the right. Take this smaller path on the right to continue along the Bowes Railway Path.

Bowes Railway was originally a colliery railway built to carry coal mainly from pits in north west Durham to the Tyne at Jarrow. The earliest section was designed by George Stephenson and opened on 17 January 1826, making it one of the world’s first modern railways. It was 15 miles long when completed in 1855. Each end was locomotive worked; the six mile middle section consisting of rope worked inclines with very steep gradients. See more at http://bowesrailway.uk

Continue your cycle along the Bowes Railway Path to the left of the car park at the museum.

Follow the path over the B1288 Leam Lane and between the houses.

Follow the path under the A184 and then across the A195 Sunderland Rd to continue next to houses.

When the path enters a more open, green area, look for the cycle path signposted off to the left for Keelmans Way (14).  Take this path to the left and follow it to join onto Wardley Lane. 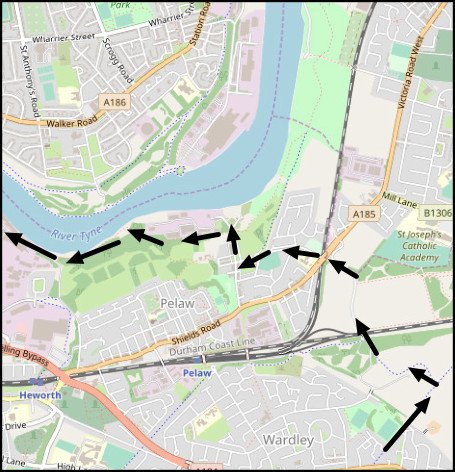 Follow Wardley Lane to the main A185 Victoria Rd W, cross over when safe and continue ahead down Davidson Rd.

Continue ahead along Brack Terrace past The Wardley pub.

Follow the signs for National Cycle Route 14 Keelman’s Way all the way back to the Gateshead Millennium Bridge where this route began.​ 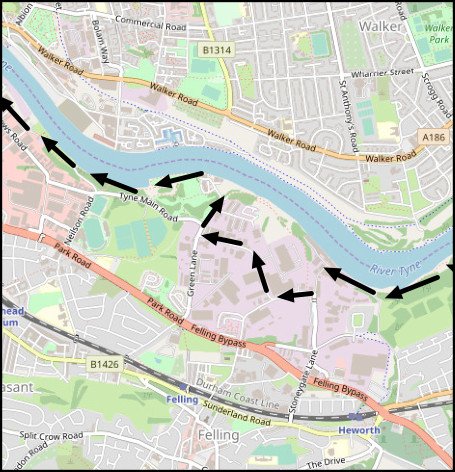 Information from various sources including wikipedia.org and https://www.gateshead.gov.uk/article/3957/Angel-of-the-North