This lovely 7km (4 mile) walk takes you from Warwick Avenue underground station to St John’s Wood underground station (or vice versa) via the beautiful Little Venice area of the Grand Union and Regent’s Canals, around Maida Vale and the historic BBC Studios, then onto the Abbey Road studios and zebra crossing made famous by The Beatles! 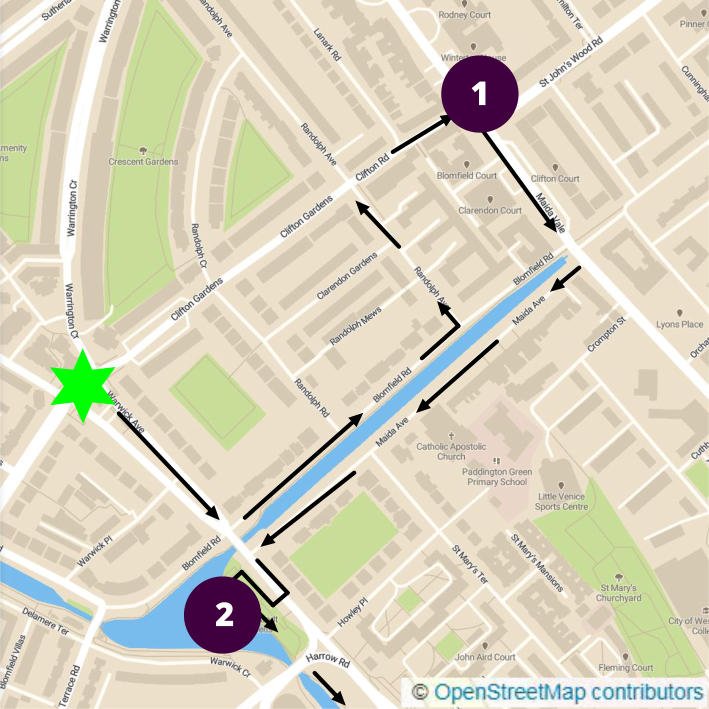 This tube station was made famous by the single of the same name by British music artist Duffy. The video opens on Duffy leaving Warwick Avenue tube station in a London cab, crying as she sings the song.

Walk down Warwick Avenue towards the canal (a South East direction). Just before the canal turn left to walk along Blomfield Road along the side of the canal. This area is known as Little Venice.

Although not far from congested roads and the commuters streaming out of Paddington Station, Little Venice is an oasis of peace and tranquillity. It’s thought to have been so-named by the poet, Robert Browning. Dozens of narrowboats, day trip boats and water cafés line this calm stretch where the Grand Union Canal meets the Regent’s Canal.

The Grand Union Canal starts in London and ends in Birmingham, stretching for 137 miles (220 km) with 166 locks. It has branches going off to cities which include Leicester, Slough, Aylesbury and Northampton. Canals started to die out as a means of transporting goods as early as the late 19th century with competition from the railways and then improvements in roads and vehicle technology in the early part of the 20th century meant that the lorry was also more attractive. The Regent’s Canal and the Grand Junction Canal companies combined as a way to try to remain competitive, but ultimately failed. But today they form a beautiful green belt through the heart of many cities.

The famous Little Venice mansions provide a stunning backdrop to the canals here. And the triangular pool, complete with willow tree, is home to several floating businesses such as the Waterside Cafe, London Waterbus, a floating art gallery and a hotel boat. You can find out more on the Canal & River Trust website, or chat to their volunteers, often found in the area on the weekends.

We’ll walk around some of the lovely roads in this area, so just take your time and enjoy the view!

As you walk along Blomfield Road take the second left to turn into Randolph Avenue (not Randolph Rd which is the first on the left). Walk along Randolph Avenue enjoying the lovely suburban housing in this area, then turn right into Clifton Road where you will find some local shops. Walk to the end then turn right again onto a short section of the busy Edgware Road A5 (Map Point 1).

Walk a short distance along the Edgware Road and just after you cross over the canal, turn right into Maida Avenue to walk along here following the canal. There are some lovely examples of Mansion apartment buildings along here, overlooking the canal.

At the end of Maida Avenue turn left into Warwick Avenue and cross the road when safe to do so (there is a zebra crossing further along). Head through the gate in the metal railings into the green space called Rembrandt Gardens (Map Point 2).

Follow the pathway at the side of the canal heading off to the left (South East direction) . 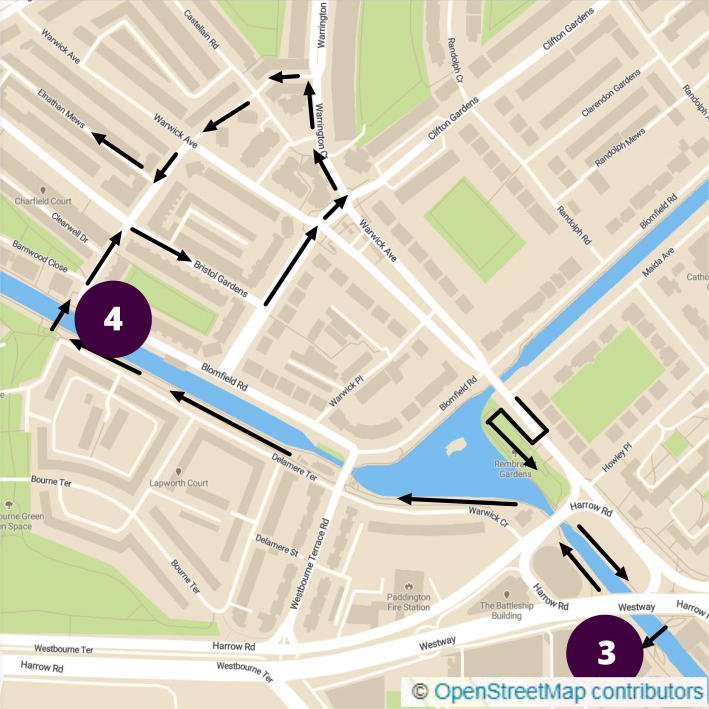 Walk underneath 2 bridges – the first smaller under Harrow Road and the second larger one underneath A40 Westway. Just after that second larger bridge look for the pedestrian bridge over to the other side of the canal and cross the canal here (Map Point 3).

Head back along the canal towpath on the other side back up towards the canal basin at Little Venice (North West direction).

From the bridge over the canal continue straight ahead up Formosa Street then turn right into Bristol Gardens. Walk along here until you reach the enxt road, Clifton Villas. We will be turning left into Clifton Villas but before you do, ahead of you on the opposite side of the road you will find Clifton Nurseries. London’s oldest garden centre, Clifton Nurseries is a hidden oasis in the heart of Maida Vale. Inspiring gardeners since 1851, hidden away behind the houses you will find an elegant gardening emporium with a rich history. Home to picturesque glass houses and packed with a rich profusion of plants, flowers, trees and accessories, this idyllic destination is worth a small detour.

Having turned left into Clifton Villas from Bristol Gardens, cross over the roundabout by the first part of Warwick Avenue then turn left into Warrington Crescent. This is an area with local shops and cafes. Follow the first part of Warrington Crescent round to the right, crossing over Warrington Gardens on your left. Look out for the Blue Plaque on the building on your left here that shows where the mathematician and code-breaker Alan Turing was born. 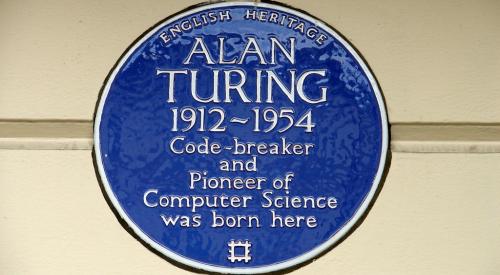 Alan Turing was an English mathematician and pioneer of theoretical computer science and artificial intelligence. During World War 2, he was instrumental in breaking the German Enigma code, leading to the Allied victory over Nazi Germany. He was born on 23 June 1912 at this spot in Maida Vale and his intelligence was apparent as early as his school days. His headmistress when he was just 9 years old commented ‘I have had clever boys and hard-working boys, but Alan is a genius’. Turing studies mathematics at Cambridge University, then a PhD at Princeton in the USA where he developed the notion of a ‘universal computing machine’ which could solve complex calculations. This would become known as the Turing machine, which foreshadowed the digital computer we all know and love today!

In 1939 Turing joined the Government Codes and Cypher School, a British code-breaking organisation (now GCHQ), which was moved to Bletchley Park when World War 2 was declared. Turing’s most notable achievement here was cracking the ‘Enigma’ code. The Enigma was an enciphering machine used by the German forces to securely send messages. Turing and fellow code-breaker Gordon Welchman developed the “Bombe machine” which from late 1940 was decoding all messages sent by the German Enigma machines. 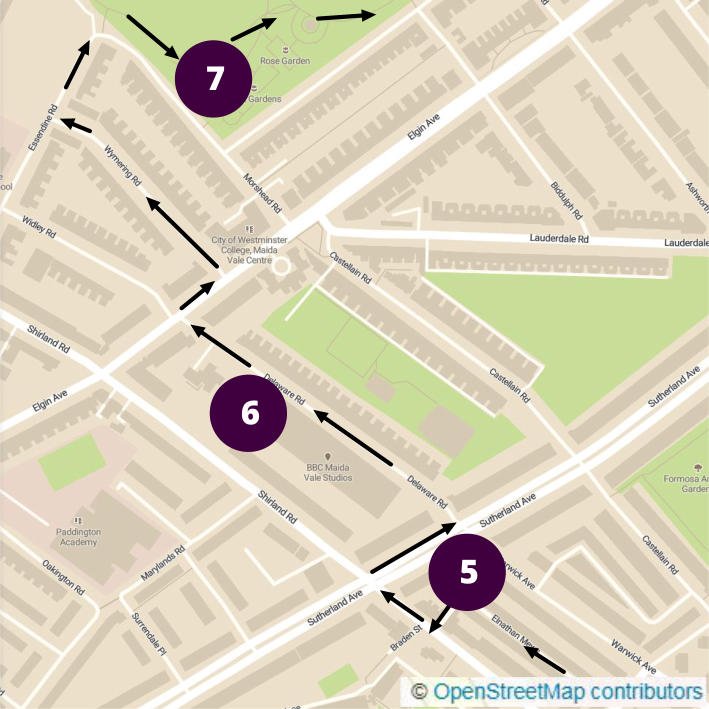 Turn right onto Shirland Road, then right again onto Sutherland Avenue and cross to the other side when safe to do so. Walk a short distance along Sutherland Road then turn first left into Delaware Road and walk along here to the end. You will pass the historic BBC Maida Vale studios on your left on Delaware Road (Map Point 6).

Built in 1909, Maida Vale Studios were originally the home of the Maida Vale Roller Skating Palace and Club, seating 2,650 people and proud possessor of its own orchestra balcony. The Palace only lasted three months however, and for the rest of the decade the building was occupied by a variety of companies. In the 1930s it became home to the BBC Symphony Orchestra, but was also a standby centre of the BBC radio news service during the Second World War. Like Broadcasting House, the site had to be repaired after taking a direct hit during the London Blitz. The site has recently been sold by the BBC. 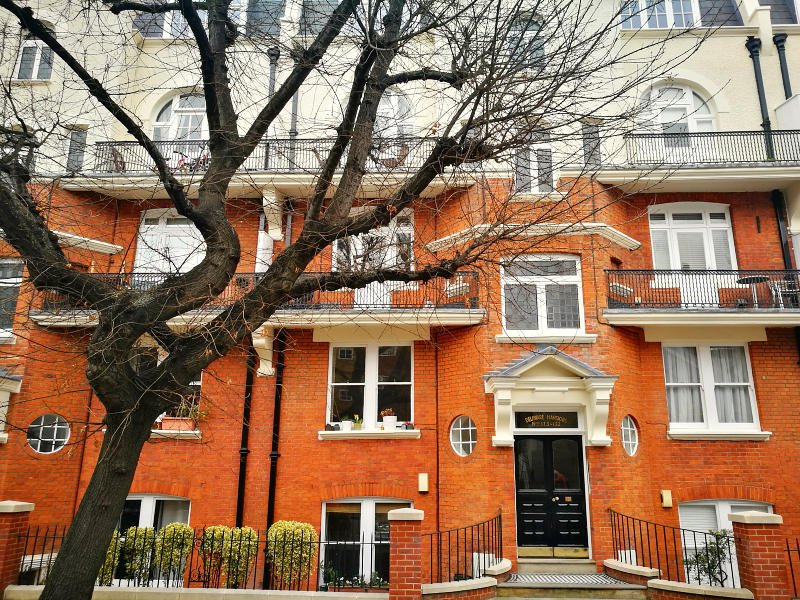 Above: Mansion apartments in Maida Vale

At the end of Delaware Road turn right into Elgin Avenue, cross over to the other side when safe to do so, then turn left into Wymering Road. There are some beautiful examples of late Victorian/Edwardian Mansion apartments along this road. At the end of Wymering Road turn right into Essendine Road and on the corner, carry on ahead to go through the metal gate into Paddington Recreation Ground (Map Point 7). 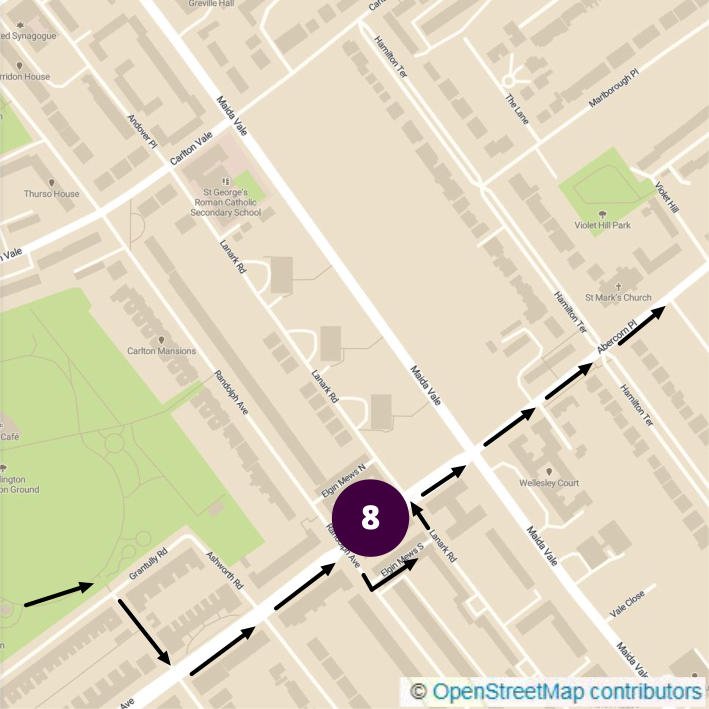 Walk through the park, following the path round to the right at first when you enter. Exit the park at the Grantully Road exit, and head straight ahead of you down Biddulph Road. Turn first left into Elgin Avenue and walk along here until you come to the roundabout with Maida Vale underground station on the opposite corner (Map Point 8). 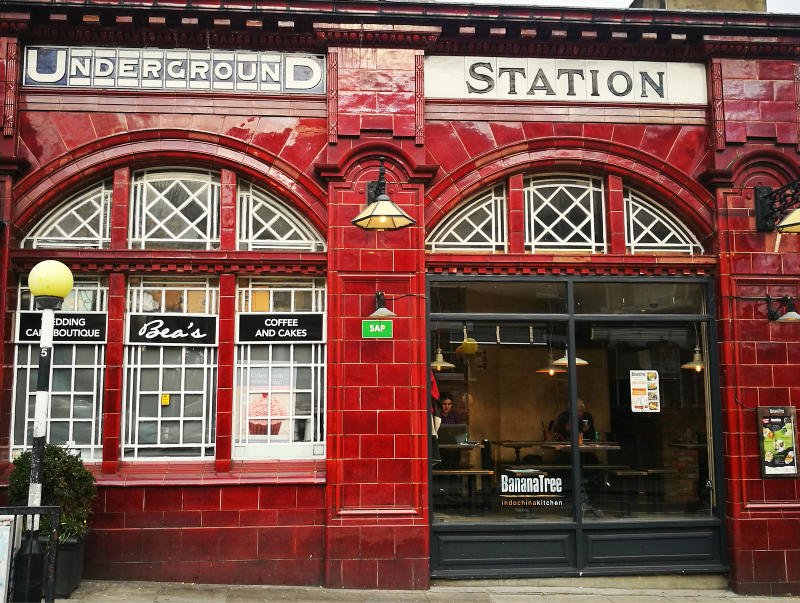 Use the pedestrian crossings to head over to take a close look at this lovely underground station which was opened on 6 June 1915. At the time, it was the first station to be entirely staffed by women and they continued to work at the station until 1919 when men returning from the First World War took their place. The station is ‘Grade II’ listed building due to it architectural and historic interest. The outside of the station and its distinctive staircase mosaics inside feature in Alfred Hitchcock’s 1927 film Downhill and the outside was also used to depict the fictional ‘Westbourne Oak’ station in the 2014 hit film Paddington.

On the corner with Maida Vale underground, walk down Randolph Avenue then turn first left into Elgin Mews South, a charming row of mews houses. At the end, turn left onto Lanark Road then first right onto Elgin Avenue again. Walk along here, crossing over various side roads when safe to do so, and continue along as it changes into Abercorn Place. 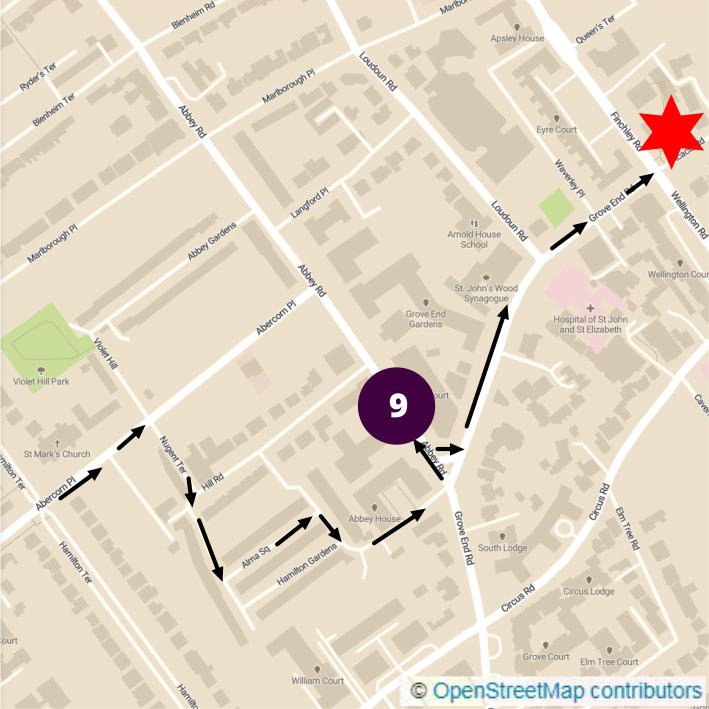 Walk along Abercorn Place until you reach Nugent Terrace on your right and walk into this terrace. The roads around here almost feel like a sleepy village area. At the end of Nugent Terrace turn right then left into Alma Square, then first left again to continue along Hamilton Gardens. At the end turn right and then follow this around the bend to the left where it changes into Garden Road.

At the end of Garden Road turn left to walk up Grove End Road/Abbey Road B507. A short distance up on your left hand side you will find the famous Abbey Road music studios, and just outside across the road, the zebra crossing made famous by The Beatles (Map Point 9). 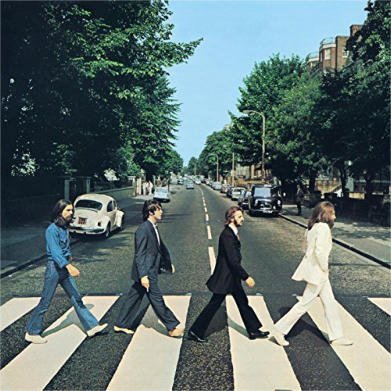 Above: The famous Beatles album cover at Abbey Road

The Beatles, Abbey Road Studios and that zebra crossing! Abbey Road was the eleventh studio album by the Beatles, released on 26 September 1969. The recording sessions for the album were the last in which all four Beatles participated. The album’s cover, which features the four band members walking across a zebra crossing that is still outside the Abbey Road Studios (and regularly causes car delays as tourists take photos recreating the image!), has become one of the most famous and imitated images in the history of popular music. 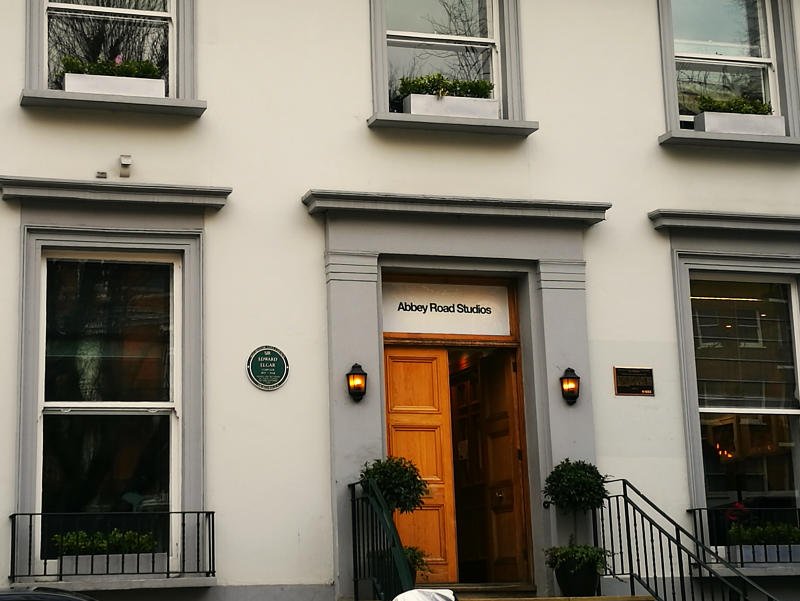 Above: The famous Abbey Road Studios

Walk across the zebra crossing, turn right to walk back along Abbey Road then take first left to go along Grove End Road. Walk along here until you reach Finchley Road/Wellington Road A41 and the St John’s Wood underground station where this walk finishes. 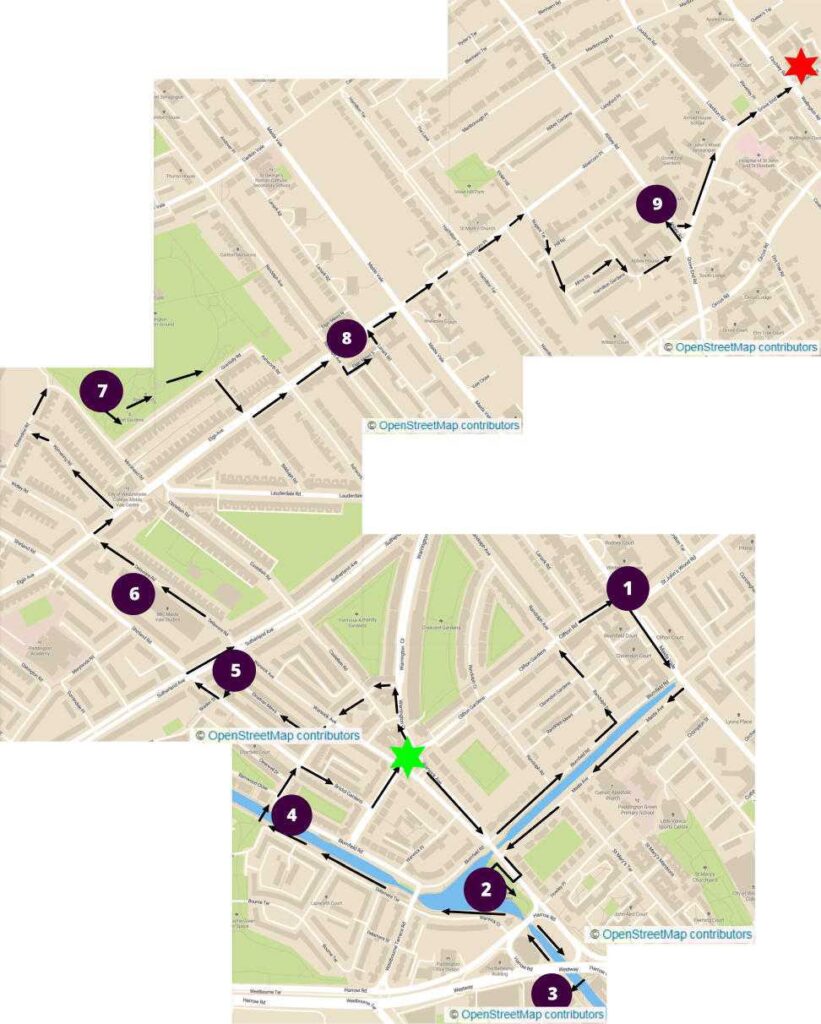