This lovely 7km (4 mile) walk takes you from St John’s Wood underground station to Camden Town underground station (or vice versa) via the beautiful Regents Canal, the green & leafy Primrose Hill and the hustle and bustle of Camden Markets. So enjoy the peace of walking alongside the canal, take in the amazing views of London from the top of Primrose Hill and the leafy streets around Chalcot Square before haggling for something unusual in Camden! We’ll show you all the best places to visit. 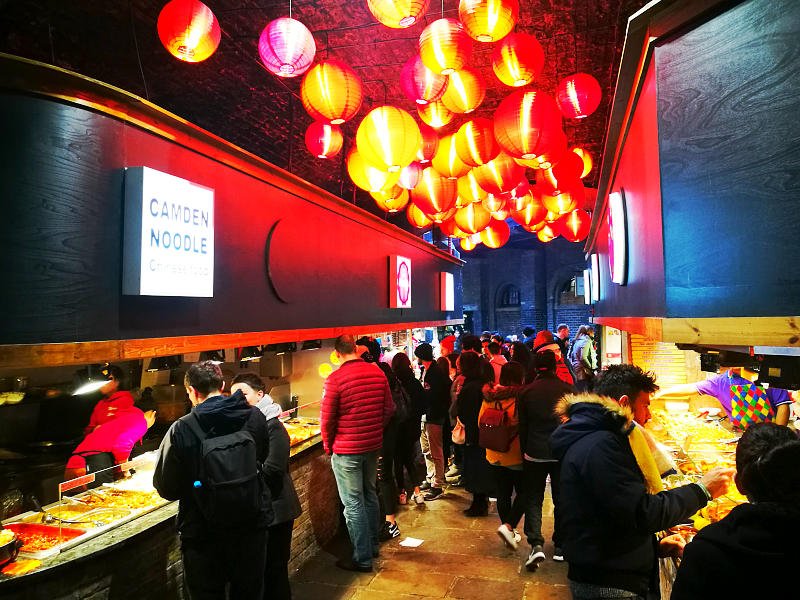 We will start this walk at St John’s Wood underground station. 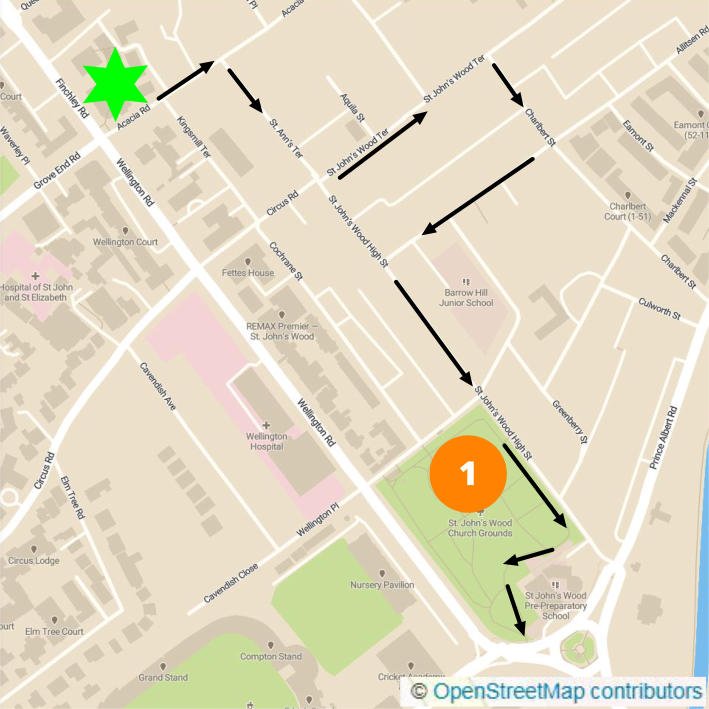 St. John’s Wood was part of the Great Forest of Middlesex in the medieval period. From 1323 the land was owned by the Knights of the Order of St. John, after whom the area is named, but at the Dissolution of the Monasteries it passed to the Crown. In 1732 the site was sold to Henry Samuel Eyre, and in the 18th century it was simply agricultural land on two fields called Great Garden Field and Willow Tree Field. The area began to be developed in the 19th century.

Turn left as you leave the tube station to walk along Acacia Road (heading East). Cross over Acacia Road where safe to do so and turn right into St Ann’s Terrace. Walk down here then turn left into St John’s Wood Terrace. Take a stroll along here then turn first right into Charlbert Street then second right into Allitsen Road. At the end, turn left to walk down St John’s Wood High Street where you will find some lovely shops, cafes and restaurants.

St John’s Wood Church and burial ground were consecrated in 1814. The burial ground was closed in 1855, and converted to a public garden in 1886. There are thought to be around 50,000 graves. From inside these grounds you will catch glimpses of the futuristic Media Centre building at Lord’s Cricket Ground, often described as looking like a UFO!

Lord’s Cricket Ground, or simply Lord’s, is often referred to as the Home of Cricket. It is also home to the MCC Museum, which is the oldest sports museum in the world, and contains the world’s most celebrated collection of cricket memorabilia, including The Ashes urn. One of the most iconic buildings in the grounds is the Media Centre, designed by the architectural firm Future Systems. Commissioned in time for the 1999 Cricket World Cup, this was the first all-aluminium, semi-monocoque building in the world. It was built and fitted out in two boatyards, using boat-building technology. The lower tier of the centre provides accommodation for over 100 journalists, and the top tier has radio and television commentary boxes. The building was awarded the RIBA Stirling Prize for architecture in 1999. 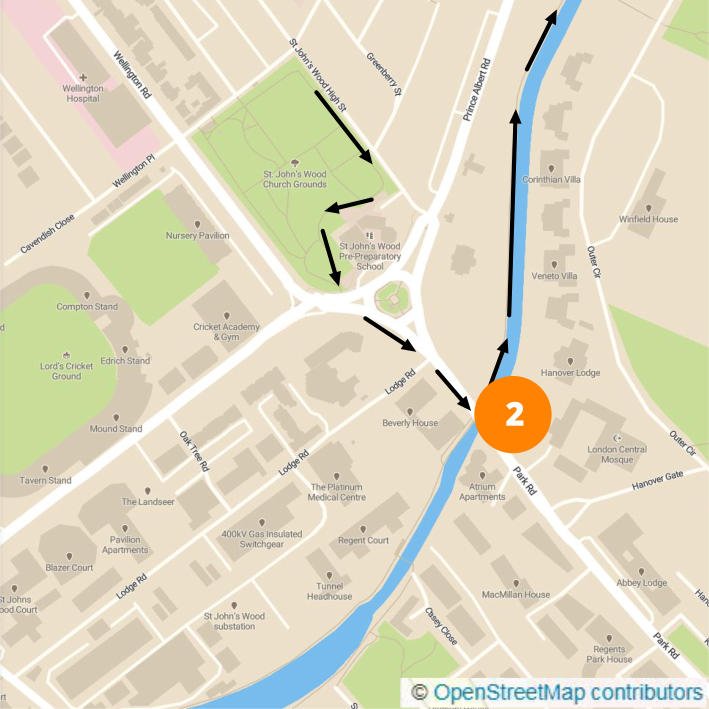 Take a stroll around the Church grounds before exiting at the Southernmost corner by the Church and the roundabout on the A41 Wellington Road/Park Road. If you turn left after leaving the Church grounds and walk a short distance along A5205 Prince Albert Road you will come to a pedestrian zebra crossing to get safely over to the other side. Then turn right to come back towards the roundabout and follow the pavement around to the left onto A41 Park Road (to avoid steps onto the canal towpath around the corner you can instead turn left to carry on along Prince Albert Road for approx 250m until you see a ramped entrance down onto the canal towpath – turn left along the canal to continue this route). When you come to the traffic lights opposite Lodge Road cross over to the other side of A41 Park Road to continue along the pavement on the other side. A short distance from the traffic lights you will see a gap through the brick wall with a stepped entrance down onto the Regents Canal towpath (Map Point 2).

To avoid the stepped entrance see the instructions above. Follow this entrance onto the canal and turn left onto the canal towpath to come back underneath the A41 Park Road.

Regents Canal is 13.8 kilometres (8.6 miles) long and was built during the early 19th century. However, by the early twentieth century, with trade lost to the railways and roads, the canal had fallen into decline. Today it is used for pleasure cruising and the canal’s towpath has become a busy cycle route for commuters. National Cycle Route 1 includes the stretch along the canal towpath from Limehouse Basin to Mile End.

As you walk along this section of the canal you will see into the back gardens of some of London’s most valuable residential properties on the other side of the canal, as well as parts of The Zoological Society of London’s London Zoo. Sir Stamford Raffles founded ZSL in 1826 and over the years has been home to many famous animals, including Guy the gorilla, Goldie the golden eagle and Winnie, who became one of the most famous bears in the world. When ZSL London Zoo opened in 1828, Decimus Burton was called on to design the grounds and animal enclosures. Many other leading architects have since contributed to the layout of the Zoo, creating a collection of buildings that includes two Grade I and eight Grade II listed structures. 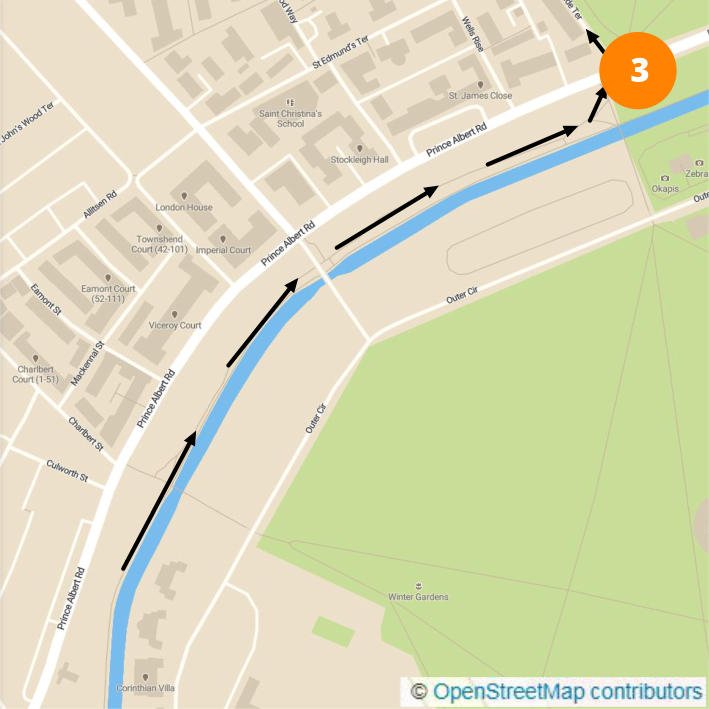 Continue for approx 1 km along the canal towpath, passing under the bridge of Avenue Road. Approx 300m beyond this bridge you will come to a ramped exit off the canal towpath up onto A5205 Prince Albert Road. Take this exit and turn right along Prince Albert Road. Cross over the pedestrian zebra crossing, turn left then immediate right to walk up Ormonde Terrace (Map Point 3). 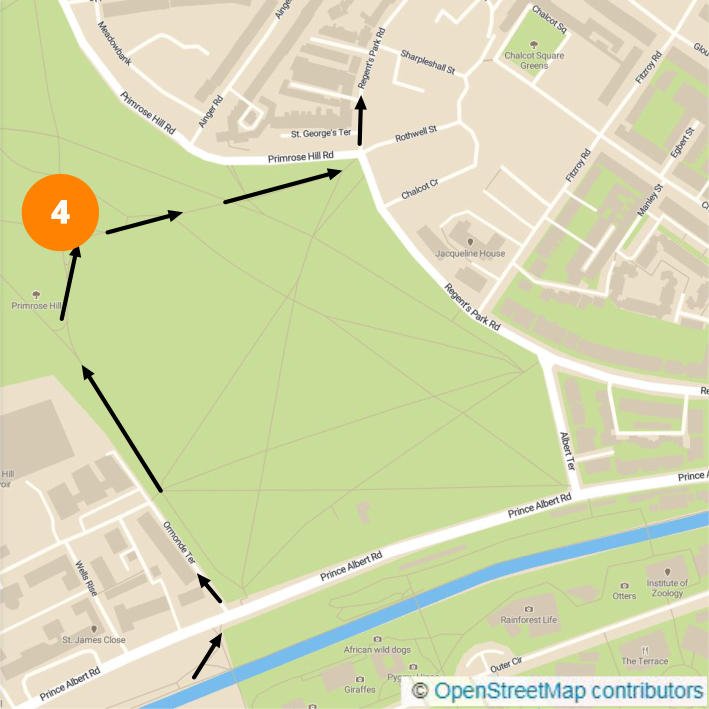 Continue up Ormonde Terrace and at the end take the metal gate into the parkland of Primrose Hill. Follow the pathways up to the left then right to reach the viewing point with some stunning views over London on a clear day, when you will be able to make out many famous landmarks (Map Point 4).

Primrose Hill stands 213 feet (65 m) high and the hill summit is adorned by an engraved quotation from William Blake. Nowadays, the surrounding roads form one of the most exclusive and expensive residential areas in London, which you are about to see! 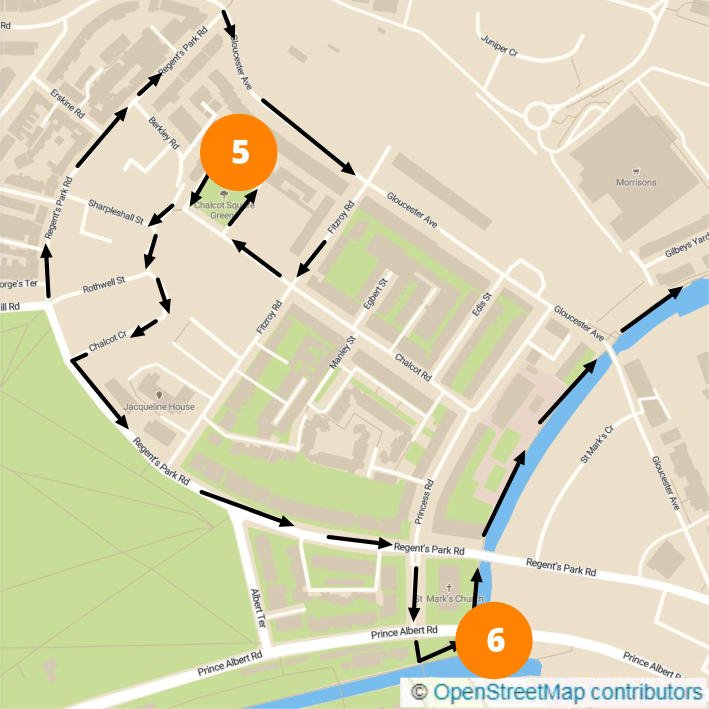 As you reach the end of Regent’s Park Road, turn right into Gloucester Avenue. Walk down here then turn first right into Fitzroy Road. Turn first right again into Chalcot Road and follow this up to the beautiful Chalcot Square Gardens square (Map Point 5).

Walk around this square, one of the most photogenic in London, and exit on the far side across the pavement onto Chalcot Square road and walk to the left towards Chalcot Crescent. Follow this lovely Crescent round until it comes out onto Regent’s Park Road and turn left to walk down here until you reach the bottom near the canal.

Just before you reach the canal turn right into St Mark’s Square. At the end cross over the A5205 Prince Albert Road using the pedestrian crossing lights and turn left along the other side. Walk along a short distance and you will come to a ramped entrance down onto the canal towpath. Take this and follow the canal to the left, around the corner (Map Point 6). 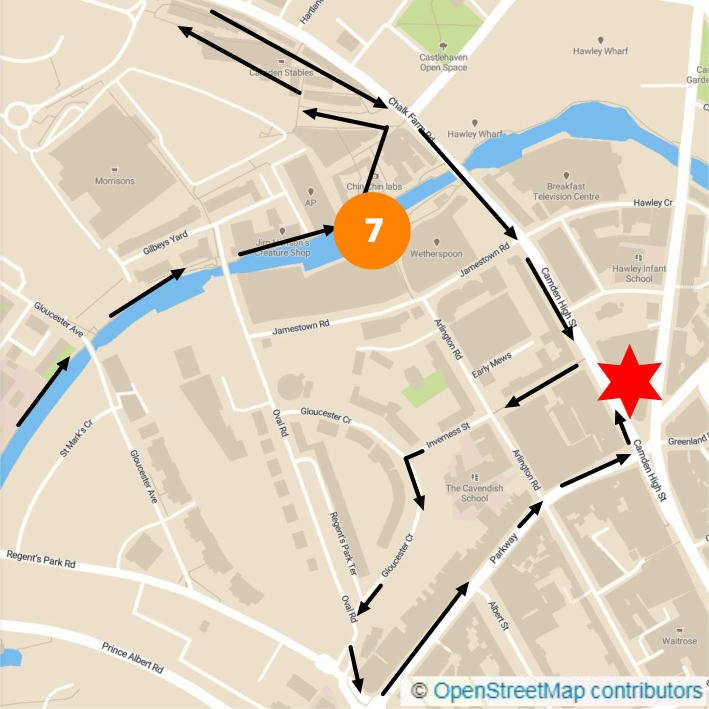 Walk along the canal until you eventually come to Camden Lock and markets (Map Point 7).

Exit the canal here (step free) and take a stroll around the market areas.

The Camden markets are a number of adjoining large retail markets in Camden Town near the Hampstead Road Lock of the Regent’s Canal (popularly referred to as Camden Lock). Among products sold on the stalls are crafts, clothing, bric-a-brac, and fast food. It is one of the most popular visitor attractions in London, as you will tell if you visit on a weekend in the summer! With stalls selling books, new and second-hand clothing, and jewellery, the Camden Lock Market retains its focus as the principal Camden market for crafts.

The Stables Market is located in the historic former Pickfords stables and Grade II listed horse hospital which served the horses pulling Pickford’s distribution vans and barges along the canal. Many of the stalls and shops are set in large arches in railway viaducts. Chain stores are not permitted and trade is provided by a mixture of small enclosed and outdoor shops and stalls, of which some are permanent, and others hired by the day. In common with most of the other Camden markets the Stables Market has many clothes stalls. It is also the main focus for furniture in the markets. Household goods, decorative, ethnically-influenced items, and second-hand items or 20th-century antiques, many of them hand-crafted, are among the wares. There are also clothing and art pieces for alternative sub-cultures, such as goths and cybergoths.

When you have finished looking around the markets, exit onto Chalk Farm Road and turn right to head in a South direction towards Camden High Street. Walk along here until you reach Inverness Street on your right and turn down here. Cross over Arlington Road when safe to do so and continue straight ahead along Inverness Street. At the end, turn left into Gloucester Crescent to see a much quieter, tourist free part of Camden! Above: Regent’s Canal at Camden​ 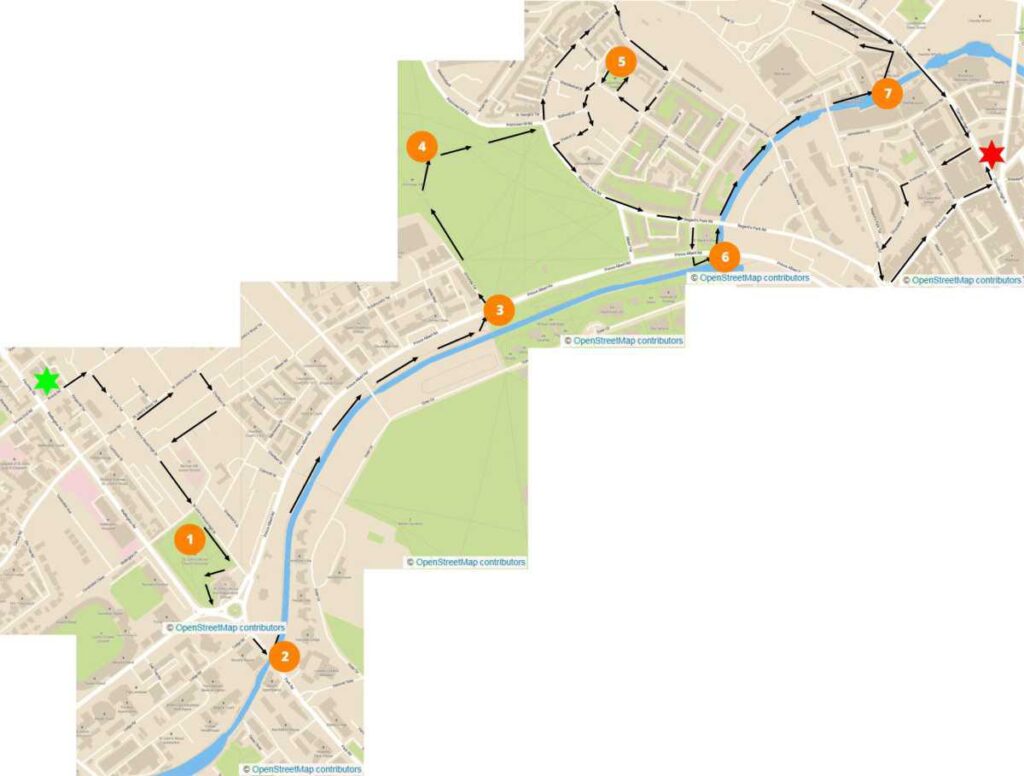